Exclusivity is always a great experience. We will share with you limited availability exclusive and or private experiences.
Looking for a specific place, experience, ask us. You can have a private shopping experience in NYC, a VIP Yacht experience in Boston and more.

Check out our upcoming special events below.

Hamilton is the hottest musical on Broadway and Beyond Times Square has a special exclusive event not to be missed! At the center of this groundbreaking multi-award-winning musical is the story of Alexander Hamilton, the “10 dollar founding father without a father”, whose ambition drove him from the position of Caribbean outsider and bastard child to American war hero and George Washington’s right-hand man. In the process, Alexander Hamilton powerfully shaped America as we have come to know it — and gave us all a template for what it means to pull ourselves up by our bootstraps and realize the American Dream. This exploration of Hamilton’s political mastermind is being called “the most exciting and significant musical of the decade.” With heart, humor, and respect, Lin-Manuel Miranda’s new musical breathes vibrant, colorful life into this story of America’s founding fathers.

•Orchestra seat to see HAMILTON the Musical on April 30, 2022.•PRIVATE VIP Post-Show one-hour open-bar Cocktail Reception at an upscale restaurantvenue near the Theatre.•Meet & Greet with actors who lit up the stage of Hamilton with their dazzlingperformances.•VIP Gift Bag of show merchandise.•24-hour support phone number.

Your guide will point out where various scenes from the series were filmed around the city – including the Bowery, Greenwich Village, Gramercy and more. Plus, they’ll be stops where you can explore these venues up close and personal with plenty of photo opportunities! Next, you’ll head to the iconic New York City Plaza Hotel for afternoon tea. This elegant tradition at the Plaza’s stunning stained glass domed restaurant, The Palm Court, now features The Midge Menu, which is their legendary three-tiered Afternoon Tea reimagined with an elevated twist on classics from the era! 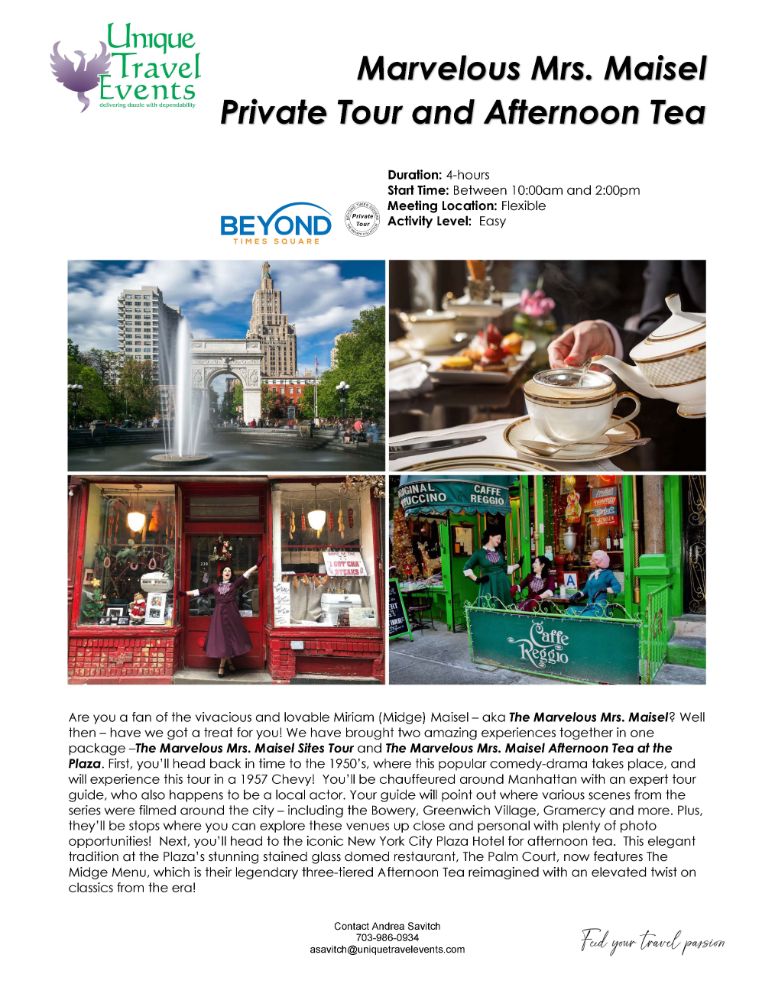 Call us now and book your exclusive experience!